A trigger is defined as something that affects your emotional state, often significantly, by causing extreme to overwhelm or distress.  It affects your ability to remain present. In the moment often causing a specific thought, and cognitive pattern.  Emotional triggers are events, things, experiences, or potentially even people who cause the mind and body to react.  It is also called a cue, prompt or call to action.  This reminder can cause a person to feel anxiety or panic.  Some people have flashbacks which are vivid, often triggering negative memories. 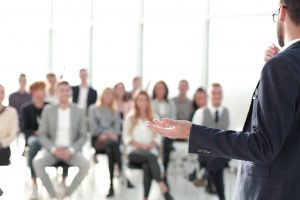 Following are three easy ways to overcome a public speaking trigger of fear:

1.  Recognize where the fear originated from.

Usually it began around puberty.  This is when adolescents suffer from a lack of self-confidence and self-worth.  They are most vulnerable during these years to criticism and judgment, especially from their peers. Comments, ridicule, and negative experiences are a validating force.  Sometimes the trigger of fear in public speaking occurs in early childhood and lies dormant, especially in the highly sensitive child.  They absorb criticism from a caregiver, relative, toxic friend, or an insensitive teacher.  This trigger continues throughout their life.  Once the trigger is recognized, it becomes less problematic and begins to diminish in intensity.

Affirmations are short positive statements that you say to yourself especially prior to public speaking.  Said often enough, they soon become part of your self-fulfilling prophecy.

3.  Relaxation strategies should be practiced daily.

Being triggered means re-experiencing symptoms of trauma when exposure to the reminders of the trauma materializes.   Triggers can be overcome through awareness, replacing negatives with positive experiences and practicing relaxation.