I attended a Conference last weekend.  The speakers, in the Conference handout, were listed as highly intelligent, well educated and experts in their field.  To my surprise, the F… and S… words punctuated their presentations too frequently.  Was their usage of profanity for shock value?  I was disappointed by the repetition of these slang and swearing words being used to get across a more casual format of speaking. 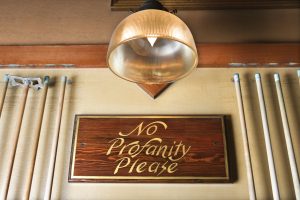 Profanity seems to diminish the speaker’s intelligence and lowers the audience’s expectations of their ability.  At times I felt embarrassed by their lack of respect for the audience.  Most of the speakers resorted to this method to fit in and perhaps sound cool or with it.  But it had the opposite effect.  It alienated the audience and left a bitter taste.

There is a high level of respect that an audience deserves from a speaker.  Speakers are often elevated to importance and looked up to as brilliant, confident role models.

Why ruin this stature by downplaying a presentation with swear words?

Even ‘um’s and ‘ah’s should be avoided.  Silence is still the best strategy to be used after a sentence or main thought.  Just like a period in a sentence, try pausing with silence for two seconds or more.

Speakers must maintain their composure while presenting, not only with their nonverbal communication skills, platform mechanics, voice dynamics but with their choice of words.  After all, a speaker is a wordsmith capable of transforming an audience through thought and feeling.  Eloquence will always trump over vulgarity.